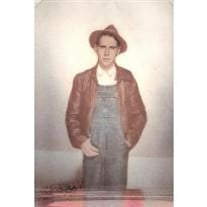 Martin Ray Greene, age 84 of Oglethorpe, GA passed away Saturday, May 30, 2009 at The Oaks Nursing Home in Marshallville, GA. Visitation was held Sunday May 31,2009 from 6 to 8 PM at Watson-Mathews Funeral Home in Montezuma. Funeral services were held Monday, June 1 at 11 AM at Red Hill Primitive Baptist Church in Oglethorpe, GA with Elder Dennis Johnson officiating. Interment followed in Oglethorpe Memorial Gardens Cemetery. He is survived by his wife of 63 years, Helen Weeks Greene of Oglethorpe, GA; three sons, Neal Greene (Diana) of Ideal, GA, Donny and Larry Greene of Oglethorpe, GA; four grandchildren, Jerry, Dawn, Candace and Jameson and five great grandchildren; sister, Mary Ann Layfield of Ideal, GA. He was preceded in death by five brothers. He was born on January 15, 1925 in Macon County, GA to the late Robert Clarence Greene and Clemmie Lockwood Greene. Mr. Greene proudly farmed for over 50 years of his life. He, along with two of his sons, cultivated his land since 1955. Even as his health declined, he was still faithful to be in the fields helping his sons. Along with being a hard-worker, he was a remarkable and loving man who was willing to help anyone in need. He would kindheartedly think of others before himself. Above all, the two most important aspects of his life were the lord and his family. He was a member of Red Hill Primitive Baptist Church in Oglethorpe, GA. He enjoyed attending church on Sundays and listening to gospel cassette tapes at his home. Yet, most of all, he enjoyed being around his family and friends, who will miss him greatly. We love you, PawPaw, and until we meet again. Friends may sign the online guest book at www.watsonmathewsfuneralhome.com Watson-Mathews Funeral Home of Montezuma had charge of arrangements.

Martin Ray Greene, age 84 of Oglethorpe, GA passed away Saturday, May 30, 2009 at The Oaks Nursing Home in Marshallville, GA. Visitation was held Sunday May 31,2009 from 6 to 8 PM at Watson-Mathews Funeral Home in Montezuma. Funeral services... View Obituary & Service Information

The family of Ray Greene created this Life Tributes page to make it easy to share your memories.

Send flowers to the Greene family.