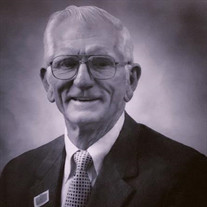 Montezuma, GA – Mr. Preston Clark Williams, Jr., 94, of Montezuma, Georgia, passed away on Sunday, September 22, 2019, at The Oaks Nursing and Personal Care Home in Marshallville, Georgia. A funeral service will be held at 1:00 p.m., Saturday, September 28, 2019, at the First Baptist Church, Montezuma, Georgia. Burial will follow at Bertha Dozier Memorial Park. Family will receive friends on Friday evening, September 27th, from 5:00 p.m. until 7:00 p.m., at Watson-Mathews Funeral Home. Former Montezuma mayor, former president of Southern Frozen Foods, active church man and civic leader, Preston was a man whose “word was his bond”. At his retirement from Southern Frozen Foods in 1990, he was presented with a leather bound book filled with letters from friends, pastors, co-workers, vendors and family members. One friend wrote, “You are the consummate human being … the unexcelled friend, a tremendous businessman and a great lover of family and friends. You leave a wonderful legacy to Southern Frozen Foods and all the people of Macon County.” Another wrote, “You will leave the world a much, much better place than you found it.” Still another called him “a Southern gentleman,” and one letter writer said he was a “fantastic jitter bugger.” Preston was born February 23, 1925, the son of Preston Williams, Sr. and Lurline Williams. He married his high school sweetheart, Sara Penn, on December 6, 1946. She died in 2012. A graduate of Griffin High School, he attended Clemson University on a football scholarship. He had previously enlisted in the Navy Voluntary Service Agreement (V5A) program while a senior in high school, and was ordered to report for duty after only one semester at Clemson. While in the Navy V5A program, he also attended Mercer University, the University of Miami, Princeton University and Columbia University. He often stated he had attended five colleges, but did not have a degree from anywhere, with the exception of the “University of Hard Knocks.” Preston has strongly supported the Scouting program in Macon County and Middle Georgia over the years. He earned the rank of Eagle Scout in 1943 and was honored in 1995 with the Silver Beaver, the highest award Scouting offers adults. He was a member of the Executive Board of the Central Georgia Council, Boy Scouts of America, from 1975 to 2000. He served on the Mercer University Board of Trustees, Macon, Georgia, from 1985 through 2004. Preston wrote letters of recommendation for numerous young adults who have applied to Mercer University. Preston started with Southern Frozen Foods as a salesman and became sales manager in 1961. He became president of the company in 1966. During his tenure, the company grew in sales from $35 million to $120 million annually. “All the people there worked with me and not for me,” he said of that time in his life. He also served as president of the American Frozen Food Institute from 1989 to 1990. He was active in his community in many ways. He was mayor of Montezuma from 1992 to 2000 and was a member of the Macon County Board of Education from 1971 to 1991. He led and helped with many worthwhile community projects; for example, he was instrumental in building the Macon County recreation center, which is now named for him. He was a member of the Board of Directors of the Macon County Chamber of Commerce, and an active member of the Macon County Kiwanis Club for over 40 years. A member of First Baptist Church, he was a deacon there from 1967 to 2000, giving up his post to allow younger men to serve. Preston was a man of his word and a “creature of habit” – good, long-lasting habits, friends say. One of his habits was consistently waking up at 5:30 a.m. each morning, exercising and taking his handful of vitamins before starting his day. He took a total of 40 vitamins daily. Another habit was his weekly visits with residents of The Oaks Nursing & Personal Care Home in Marshallville each Tuesday morning for the past 20 years. He habitually arrived on time at each and every event he was attending. He also was an avid golfer, playing 18 holes every Monday, Wednesday and Friday. He was a runner and from 1977 to 2000 he logged a total of 29,982 miles. Before his death, his habit was to work out for one hour and five minutes each morning and to walk one mile. He often stated he had “lived a blessed life.” These are some of his thoughts on life: “What happens to you may be an accident -- How you respond to it is not.” “Make sure your caring includes doing.” “Help the helpless and give to the needy, but do it out of compassion, not pity.” “If you think you are too important to help someone in need, you are only fooling yourself -- you are really a nobody.” Preston is survived by two sons and daughters-in-law, Clark and Gail Williams of Palm Harbor, FL , and Bill and D.C. Williams of Montezuma, GA; two grandsons, Bill Williams and his wife, Kelly, of Montezuma, GA, and Dan Williams and his wife, Lynsey, of Montezuma, GA; two great grandsons, Dan and James Preston Williams; and two great granddaughters, Leah and Chandler Williams; one niece, Beth Kasulitus, and two nephews, Jimbo Ragsdale and Richard Ragsdale; and a host of cousins and friends. In addition to his parents, he is preceded in death by one brother, Kenneth “Bubba” Williams. In lieu of flowers, the family requests that donations be made in his memory to the First Baptist Church Montezuma, P.O. Box 357, Montezuma, GA 31063. Friends may express condolences and sign the online guestbook at www.watsonmathewsfuneralhome.com. Watson-Mathews Funeral Home in Montezuma, Georgia has been entrusted with funeral arrangements.

The family of Mr. Preston Williams created this Life Tributes page to make it easy to share your memories.

Send flowers to the Williams family.