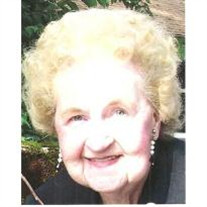 Byromville, GA - Martha Olson Hill, age 87 of Byromville, GA passed away Friday, July 2, 2010 at Wellstar Kennestone Hospital in Marietta, GA. She was born Martha Lucille Olson on September 12, 1922 and raised on a cattle farm near Grindstone, a small prairie village in South Dakota. She was the youngest of five children and she was the final survivor.Martha graduated from Philip High School in South Dakota. She attended the University of the Black Hills in Spearfish, South Dakota and taught in a rural school for one year. She moved to Los Angeles, California during World War II where she was employed as a secretary in the engineering department of Lockheed Aircraft Corporation in Burbank through the duration of the war. While living in California she attended college at the Art Center College of Design and also the Frank Wiggins School of Dress Designing. She met Melvin (Top) Hill who was stationed in Burbank during the war and moved to Byromville, Georgia where they were married on June 12, 1946 after the war ended. She was employed by the Bank of Byromville until she retired after thirty years. She was a member of the Byromville Baptist Church, Adult Senior Sunday School Class, Senior Saints, Senior Saints Choir, and W.M.U. She taught in the Primary department and worked with the children’s choir for several years. Martha was active within her community and was a member of the Byromville Women’s Club where she was a past secretary. She was a member of the National Rural Letter Carriers Auxiliary and served as vice president in the 3rd district for the State Rural Letter Carriers Auxiliary. She was also a member of the Woodmen of the World. Martha enjoyed sewing, painting, gardening, cooking, traveling and being with her grandchildren. She will be remembered by many for her vivacious zeal for life, her gentle and caring ways for others, her kindness, and her love for all of those she knew. She is survived by her two sons, Ed (Tracey) Hill of Woodstock, Georgia and Melvin (Debbie) Hill of Woodstock, Georgia. She was “Mimi” to seven grandchildren. In lieu of flowers, donations may be given to the Byromville Baptist Church, P.O. Box 126, Byromville, GA 31007. A funeral service will be held at 11:00 a.m., Wednesday, July 7, 2010 at the Byromville Baptist Church with burial following in Swearingen Cemetery. Rev. Dennis Phillips and Rev. Andy Blankenship will officiate. Family will receive friends from 6 p.m. until 9 p.m. at the funeral home on Tuesday, July 6, 2010. Watson-Mathews Funeral Home of Montezuma has charge of arrangements.

The family of Martha Olson Hill created this Life Tributes page to make it easy to share your memories.

Send flowers to the Hill family.