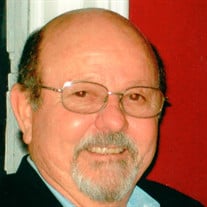 MONTEZUMA, GA - Jerry Leonard Brown, age 72, of Montezuma, GA, passed away peacefully at his home on Sunday, December 18, 2016, after a lengthy illness. He was born on August 6, 1944, in Montezuma, GA to the late Gordon and Irene Brown. Jerry was a graduate of Macon County High School and Georgia Southwestern College where he received a BS in Business Administration. Jerry loved sports and excelled in Football, Basketball and Track. In his senior year of high school, he was voted “Outstanding Athlete.” After graduation, Jerry enlisted in the U. S. Army and served a tour in the Vietnam conflict. He received numerous awards, including the Bronze Star Medal with Valor and the Vietnam Silver Service Star Medal. After returning from the service, Jerry served in different managerial roles in warehouse logistics throughout the U.S. In 2006, Jerry returned to Montezuma to care for his beloved mother. He was an avid fisherman and loved to fish with his “best bud,” the late Wendell Peavy. He also enjoyed NASCAR racing and watching Georgia football. He was a member of the Montezuma United Methodist Church. Jerry is survived by his beloved wife, Nita Pritchett Brown; one son, Jerry L. Brown, Jr. of Montezuma; one stepdaughter, Becky Robinson (Ira) of Lincoln, AL; and one stepson, Chris Lockerman (Erin) of Social Circle, GA.; and six grandchildren, Brianna Brown, Nickolas Robinson, Casey Priehs, Cali Priehs, Ian Lockerman and Hannah Lockerman. He is also survived by his brothers Sidney Brown (Elizabeth) of Palm Coast, FL and Jack Brown (Gail) of Savannah, GA; his sister-in-law Margie of Newnan, GA (Wife of his late brother, Mitchell Brown.) He is also survived by nine loving nieces and nephews. Funeral services will be held on Wednesday, December 21, 2016. Public burial at Bertha Dozier Cemetery at 10:00 a.m., Visitation at Montezuma United Methodist Church at 11:00 a.m., followed by a Celebration of Life at 12 Noon. The family requests that contributions be made to the Montezuma United Methodist Church, P. O. Box 159, Montezuma, GA 31063, or Wounded Warriers Project, 3343 Peachtree Road NE, #M20, Atlanta, GA 30326. The family expresses their sincere appreciation to all the families and friends for their support throughout his journey. They would also like to thank Hope Lodge, Stovall Foundation, Northside Hospital, Georgia Cancer, and Georgia Hospice for their services. Friends may sign the online guestbook and express condolences to the family at www.watsonmathewsfuneralhome.com Watson-Mathews Funeral Home in Montezuma, GA has been entrusted with arrangements for Mr. Jerry Leonard Brown.

MONTEZUMA, GA - Jerry Leonard Brown, age 72, of Montezuma, GA, passed away peacefully at his home on Sunday, December 18, 2016, after a lengthy illness. He was born on August 6, 1944, in Montezuma, GA to the late Gordon and Irene Brown. Jerry... View Obituary & Service Information

The family of Mr. Jerry Brown created this Life Tributes page to make it easy to share your memories.

Send flowers to the Brown family.