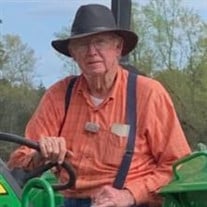 Terry E. Ham Sr., a simple farmer and loving family man, passed away at home on December 23, 2021. “Big Daddy” or “T,” as he was lovingly known, will be dearly missed. He was generous and kind to those who knew him. Born in Montezuma, he was the third son of the late Mack Ham Sr. and Viloula Young Ham. He was the husband of the late Margaret “Peggy” Grissom Ham. He was also preceded in death by his brother, Mack Ham Jr.; step-son, Wesley Edward Jones; and sister in law, Becky Ham. Terry and his brother, Tommy, farmed together on the family farm for over fifty years. He was successful in growing peaches, plums, and pecans throughout his career. Cattle were also an important part of Ham Brothers’ Farm. As he slowed down in the last few years, Terry continued to be a part of a successful orchard of pecans in Macon county. Over the years he was best known for sweet “tree ripe” Redskin, Elberta, and Georgia Bell peaches; all of which he was ready to share with his neighbors. Terry was the true example of the southern farmer, as was shown by his example of hard work and his expectation for those around him to do the same. At the end of a hard day’s work, his hat, suspenders, and jeans were often covered by the Georgia red dirt that he loved. Although he had one son, he raised many children and grandchildren throughout his life. He is survived by his son, Dr. Terry E. Ham, Jr., and his wife, Dr. Kim Ham; grandchildren, Trey, Riley Jill, Jack, and Rhodes Ham; Companion, Susan White; Brother, Tommy Ham; Step-children, Bill Hicks, Diane Hicks Pitts (Tony), and David Hicks(Melody); Melissa Mitchell(Lee), Katie Bearden( James Coleman ) and Randy Jones(Aimee); step grandchildren, Amanda Barfield(Kyle), Nash Murph(Sara), Wesley Murph(Sheldon), Garrett Mitchell(Jordan), Hannah Kate Brown(Garrett), Owen Jones, and Miles Jones. His extended family includes Jane Horsting, her children Christy Horsting and April Pearson(John), and her grandchildren, John Garrett and Gracie Pearson. A private service will be held at a later date. Per his wishes, Terry will be cremated and spread over his pecan orchard on the farm, where he loved to be. In lieu of flowers, the family requests donations to the American Heart Association. Online condolences may be expressed by visiting www.fairhavenmacon.com. Fairhaven Funeral Home and Cremation Service, Macon GA has charge of arrangements. (A courtesy of Watson-Mathews Funeral Home, Montezuma, GA)

The family of Mr. Terry Eugene Ham Sr. created this Life Tributes page to make it easy to share your memories.

Send flowers to the Ham family.