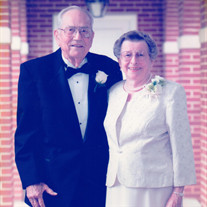 MONTEZUMA, GA - Sybil Lindsey Levie, age 92, passed away on Thursday, April 23, 2015, after a brief illness. Visitation is scheduled for 6 to 7:30 p.m., Friday, April 24, 2015 at Watson-Mathews Funeral Home. Funeral services will be held at 11 a.m., Saturday, April 25, 2015 at First Baptist Church of Montezuma with Rev. LaMon Brown officiating. Burial will be private. She was preceded in death by her husband Walter Levie and a son-in-law, Joel Medlin. Mrs. Levie was a homemaker and substitute teacher. She was a member of First Baptist Church of Montezuma. Mrs. Levie is survived by her son, David Levie, his wife Sheila, and her daughter, Sandye Levie Medlin. She was the grandmother of four, Lindsey (Mary Ellen) Levie and Daniel (Meg) Levie and Walter (Mystie) Medlin and Zacheus Medlin. She was the great- grandmother of John and Emily Levie (Lindsey and Mary Ellen Levie,) Lillianna Medlin (Walt and Mystie Medlin), Margaret “Maggie” and Will Levie (Daniel and Meg Levie.) She will be missed by family, friends and her two long-time caregivers Shirley Jolly and Christine Thomas. In lieu of flowers, donations may be made to First Baptist Church Memorial Fund, P.O. Box 357, Montezuma, GA 31063. Friends and family may view and sign the guestbook at www.watsonmathewsfuneralhome.com. Watson-Mathews Funeral Home of Montezuma, GA is in charge of funeral arrangements.

The family of Sybil Levie created this Life Tributes page to make it easy to share your memories.

Send flowers to the Levie family.