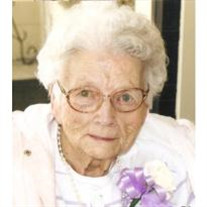 MONTEZUMA, GA - Sarah Belle Holley Hall Beard, age 88, of Montezuma, GA passed away Sunday morning, August 28, 2011 at the Montezuma Health & Rehabilitation Center. Funeral services will be held at 2 PM, Monday, August 29 in the Chapel of Watson-Mathews Funeral Home with Rev. Mark Poole officiating. Burial will follow in Bertha Dozier Memorial Park Cemetery in Montezuma. Mrs. Beard will lie in state for viewing at the funeral home on Monday from 8 AM until the funeral hour. The family will be present an hour before the services. At other times the family will be at the home of Richard and Alice Hall, 338 Camp Road in Oglethorpe. She was born in Unadilla, GA, but lived most of her life in Macon County. She was born on February 24, 1923 to the late Elijah and Emily Richardson Holley from Vidalia, GA. Mrs. Beard worked at Montezuma Health Care for many years and was employee of the month in August of 1975. She was devoted to her children and grandchildren. She was preceded in death by her two husbands, Robert Hall and Major Beard, a son, Robert Eugene Hall and three brothers, J.E., Harry and John Holley of Vidalia, GA. Mrs. Beard is survived by her four daughters and sons-in-law, Brenda and J.C. Lamberth of Montezuma, GA, Linda and Don Byers of Savannah, GA, Carol and Jack Teal of Oglethorpe, GA, Wendy and Randy Nelson of Montezuma, GA; two sons and daughters-in-law, Richard and Alice Hall of Oglethorpe, GA, George Robert Hall and his wife Charlotte of Montezuma, GA; thirteen grandchildren and twelve great grandchildren; three sisters, June Lasher of Hazelhurst, GA, Barbara Skipper of Fort Valley, GA, Sharon Scott of Vidalia, GA; one brother, Danny Holley of Vidalia, GA; one sister-in-law, Videll Holley of Lakeland, FL; several nieces, nephews and cousins also survive. Watson-Mathews Funeral Home in Montezuma is in charge of arrangements.

The family of Sarah Hall Beard created this Life Tributes page to make it easy to share your memories.

Send flowers to the Beard family.