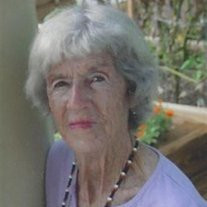 DAHLONEGA, GA - Pat Dozier of Dahlonega, Georgia (formerly of Montezuma and Buford, Georgia) died February 11, 2013 at the age of 91. Born Frances Mary Kennedy in Newport, New Hampshire, she nicknamed herself “Pat” and was always known as “Miss Pat.” Pat married Lieutenant James Walton Dozier of Montezuma in Newport, Rhode Island on February 26, 1945 when Lt. Dozier was mustered out of the U.S. Navy where he served as a lieutenant aboard the USS Wichita. Pat and Jim raised their twin daughters, Inez and Buff, in all three towns of Macon County, Georgia; Montezuma, Oglethorpe and Ideal. Pat served as mayor of Montezuma in the 1980’s and worked as a farmer’s accountant at Southern Frozen Foods. She was a founding member of St. Michael’s Catholic Church. Pat was a life-long democrat, and she was part of the original “Peanut Brigade” that traveled to her native New Hampshire to work on behalf of President Carter. She served as a delegate at two Democratic National Conventions. Pat loved her faith, her family, her politics, and her poetry. She was awarded first place in 1981 by the Poetry Society, Inc. for her poem entitled “ China Doll” which was a metaphor for the upheaval in China. Like Flannery O’Connor, her poetry reflected her roots as a Yankee Catholic in the deep South. She was awarded Special Mention fro her poem of biting political satire, “Nixion.” Her daughters plan to collect her poems and writings. Pat died like she lived – with dignity, independence and strength. She is at peace now where the big bands are playing, progressive thinking is encouraged, prejudice is nonexistent, and tolerance abounds! She will most probably continue to let her opinions be heard. Pat is survived by daughter, Buff Ramsey of Buford, Georgia; her daughter, Inez Harris and her husband , Tom, of Big Canoe, Georgia; her granddaughter, Ramsey Nix, of Athens, Georgia; and her grandson, Conor Harris, of Fairplay, Colorado. A Graveside memorial service will be held at a later date at Felton Memorial Cemetery in Montezuma. The family requests that all memorial gifts be sent to St. Michael’s Catholic Church, P.O. Box 685, Montezuma, Georgia 31063. Condolences may be expressed on-line at www.dahlonegafuneralhome.com.

The family of Pat Dozier created this Life Tributes page to make it easy to share your memories.

Send flowers to the Dozier family.