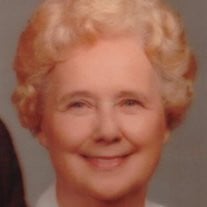 OGLETHORPE, GA - Mary Margaret Watson Conyers, age 89 of Oglethorpe, GA, formerly of Calhoun, GA, passed away in the early hours on Monday, June 17, 2013 at the Coliseum Medical Center in Macon, GA. Funeral services were held at 12:00 PM, Thursday, June 20th at Mt. Zion-St. Luke Lutheran Church in Oglethorpe, GA with Pastor Harry E. Tedrow officiating the service. Graveside services will be held at 11:00 AM, Friday, June 21st at Oak Hill Cemetery in Cartersville, GA with Rev. Jan Rhodes officiating the service. Memorial contributions may be made in her memory to Mt. Zion-St. Luke Lutheran Church, General Fund, P.O. Box 187, Oglethorpe, GA 31068 or to an animal shelter of your choice. Survivors include her loving daughter, Kim Cornett and her husband C.B. Cornett of Juliette, GA; three grandchildren, Caleb Cornett of London, KY, Kristen Cornett Keithley of Temple, GA and Katie Cornett O’Brien of Lizella, GA. Margaret was known to her grandchildren as Rietsie. She loved her precious grandchildren as well as new grandson’s Kyle Keithley and Chad O’Brien. Margaret modeled the characteristics of the Proverbs 31 lady in her roles as a devoted wife and loving mother and grandmother. All who knew Margaret admired both her engaging personality and decisive spirit. Margaret certainly lived life with passion and loved all of God’s creatures both great and small – with the exception of snakes. She loved studying God’s Word and throughout her life as a gifted teacher she shared her talent with others in the adult Sunday school classes she taught in both Calhoun and Oglethorpe. She was born July 9, 1923 to the late Margaret Carter Byrd Watson and Tillman Watson in Rensselaer, Indiana. At a young age she moved with her family to Calhoun, GA. After graduating from high school in Fairmont, GA she became a dental assistant before moving to Florida, where she served as a flight attendant and later as a chief stewardess for National Airlines logging over 4,850 hours in the air. Mary Margaret married her beloved Fleming Winn Conyers, in 1949. In 2003 the couple moved from Calhoun, GA to Oglethorpe, GA where they became communicants of the Mt. Zion – St. Luke Lutheran Church and active members of the Oglethorpe community where she participated in various activities, including memberships in the Oglethorpe Lions Club and Garden Club. She loved to travel and her hobbies included golf, playing card games, and playing piano by ear. An avid history buff, Margaret enjoyed sharing information about the history of World War II especially concerning the 82nd airborne division. Friends may express condolences to the family and sign the online guest registry on Watson-Mathews Funeral Home website at www.watsonmathewsfuneralhome.com Watson-Mathews Funeral Home of Montezuma is in charge of funeral arrangements.

The family of Mary Margaret Conyers created this Life Tributes page to make it easy to share your memories.

Send flowers to the Conyers family.