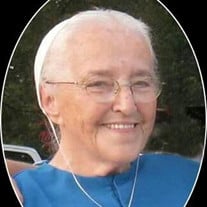 MONTEZUMA, GA - Mrs. Lena Swartzentruber, age 80, passed away Sunday, February 1, 2015 at her home. A visitation and viewing will be held from 6 to 8 p.m., Tuesday, February 3, 2015 at the Montezuma Mennonite Church. Funeral services will be... View Obituary & Service Information

The family of Lena Swartzentruber created this Life Tributes page to make it easy to share your memories.

Send flowers to the Swartzentruber family.