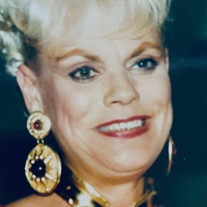 Kay Frances Middleton Storey was born August 17, 1941, and passed away Sunday morning January 2, 2022, after an extended illness in the hospital. She had shared her words of affection for each one of her children a few days before passing. She was born to Margaret Rose Martin and Chris Simons, and then she was adopted by S. Allen and Christine Middleton of Baxley, Georgia. She graduated from Appling County High School. She was first runner-up in the Miss South Ga. pageant. She attended College at Young Harris College and later studied Cosmetology in Macon, Georgia, where she met and married Malcolm L. Wood, Sr. They had two boys and a girl. She later married James A. Storey and they had another son. She loved her children and did much to instill confidence in them. She was a talented lady with a beautiful voice. She also played the saxophone and piano. Music was used as she raised her children helping to bring happiness in keeping house. She joined the Church of Jesus Christ of Latter-Day Saints and held callings in the church, teaching and working with the Primary, Temple Prep classes, and the Young Women. Many of the girls still express appreciation for her. Her therapy was exercising and riding her bike at Cooper Creek Park. Rheumatoid arthritis took that ability from her, but it didn’t stop her from using her exercise bike which she often used in spite of the pain. Her daughter cared for her in Utah. For the last 9 years, she stayed with her and for 8 years had her own apartment. As her health declined, she was moved back to Georgia to be near family and enjoyed the reunion. She loved her family and prayed for them by name. The grandchildren and great-grandchildren felt her endearing love for them. She often let folks know if she thought they needed to straighten up. We will miss her prayers but are glad to have another angel praying for us. Her memory will forever be treasured by her daughter, Melanie Call, and husband, Bruce of Ideal, Georgia; three sons: Malcolm Wood and wife, Janalee of Sunset, Arizona, Kelly Wood and wife, Marta of Ideal, Georgia and Jason Storey and wife Ashley of Ashville, Alabama, a sister, Jeanne Delmonego of Summerville, South Carolina. Also, surviving are twenty-three grandchildren and thirty-one great-grandchildren. Along with her parents, she was preceded in death by her husband, James Allen Storey, brother, Jimmie Miles, and two grandsons, Joseph Call and Ashton Burris. A funeral service will be held at the Columbus Stake Center on Saturday, January 8, 2022. A viewing will be held at 10:00 a.m. and the service will follow at 11:00 a.m. We ask all to wear masks and socially distance in families if attending. No ceremony will be held at the graveside. Dedication of the grave will be held later that day at Riverdale Cemetery in Columbus, Georgia where she will be laid to rest next to her deceased husband, James Allen Storey. Flowers are accepted. Watson-Mathews Funeral Home in Montezuma, GA has been entrusted with the arrangements for Mrs. Kay Frances Middleton Storey.

Kay Frances Middleton Storey was born August 17, 1941, and passed away Sunday morning January 2, 2022, after an extended illness in the hospital. She had shared her words of affection for each one of her children a few days before passing.... View Obituary & Service Information

The family of Mrs. Kay Frances Storey created this Life Tributes page to make it easy to share your memories.

Send flowers to the Storey family.