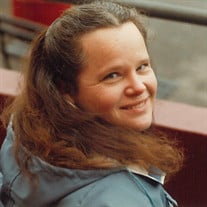 MARSHALLVILLE, GA - Ms. Karran Geter, 73, of Marshallville, Georgia, formerly of Louisville, Kentucky, passed away Friday, September 13, 2019 at the Taylor County Health & Rehabilitation Center in Butler, Georgia. A memorial service will be held Monday, September 23, 2019 @ 6:00 p.m. at Morningside Baptist Church, 7212 Arnoldtown Rd. Louisville, KY 40214. She will be laid to rest in Louisville Cemetery, Louisville, Kentucky. Karran was born on February 8, 1946 in Ft. Benning, Georgia to the late Hugh Dorsey Stripling and Wautile Purvis Stripling. She was also preceded in death by her daughter, Elizabeth Georgette Geter and her brother, Tony Lee Stripling. She was a 1964 graduate of Peach County High School. She worked 18 years as a switchboard operator with AT&T and 20 years as a security officer in a variety of security companies in Louisville, Kentucky before retirement. She loved gardening, cooking and knitting. She loved a variety of pets through-out her life and is survived by her dogs, Harley and Rusty. Her greatest joy in life was her family which she loved dearly. Survivors include sister, LTC (retired) Marla Stripling of Marshallville, Georgia; her son, Christopher Todd Geter, three granddaughters, Anita Corine Geter, Timbrel Geter and Marha Geter; great-granddaughter, Elizabeth Ann Geter; two great-grandsons, all of Louisville, KY and a nephew, Shannon Hugh (Tina) Self of Walnut Creek, California. Friends may express condolences to the family and sign the online guestbook at www.watsonmathewsfuneralhome. Watson-Mathews Funeral Home in Montezuma, Georgia has been entrusted with arrangements for Ms. Karran Ann Geter.

The family of Ms. Karran Ann Geter created this Life Tributes page to make it easy to share your memories.

Send flowers to the Geter family.