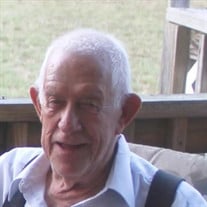 OGLETHORPE, GA - James Lawson Arnold (Jim), of Oglethorpe, Georgia, died at Miona Geriatric and Dementia Center on June 25, 2020. Born on what he delighted in telling you was The Greatest Day of the Year, December 19, 1927, Jim lived to the ripe old age of 92. Oldest son of Walter and Jessie in Talladega, Alabama, Jim’s heart belonged to the wilds of Alabama throughout the entirety of his life, no matter where he roamed. He loved to tell about the times he had growing up with his two brothers and how they constantly exasperated their mother. As a young teenager during WWII, Jim longed to suit up and fight the Nazis, however, his mother foiled his dreams. Ultimately though, as his 18th birthday approached, he convinced her to sign the papers and he headed off for a resort stay on Parris Island, courtesy of the United States Marine Corps. In the waning years of his life, there was nothing Jim loved more than to regale someone with his tales of life on Parris Island and the many, many times he got himself in trouble over there. Most of those tales are not repeatable in family newspapers. From Parris Island, Jim traveled to Camp Pendleton, California, then on to occupied Japan, quite a whirlwind for a boy who had never set foot outside the state of Alabama. He was later transferred to Tientsin, China, where he remained for most of his time in the Marines. Once his commitment to the Marines was completed, Jim tried college but decided it wasn’t for him. In March 1950, he enlisted in the Air Force. He had always loved airplanes and knew that he wanted a career in aviation. The Air Force stationed him first at Marks Air Force Base in Alaska, then Chennault Air Force Base in Lake Charles, Louisiana, where he served the remainder of his commitment. It was the Air Force which changed his life, Jim said, because he was able to obtain an education and training to become a Flight Engineer and gain skills that would allow him to pursue a lifelong career in aviation once he left the Air Force. Upon leaving the Air Force, Jim went to work for Lockheed, and at one point he spent two years in Washington, D.C., as he served as a representative for Lockheed at the White House during President Nixon’s term. He remained with Lockheed for many years, spending time in Iraq and the Philippines. After retirement, Jim was able to pursue his avid interests in fishing, gardening, and cabinet making. Jim was preceded in death by his parents, Walter and Jessie Arnold; two sons, Jess Arnold and Jimmy Arnold; and two brothers, Bloyce Casey Arnold (who died in the Korean War) and Zewell Horn Arnold. Survivors include his wife, Franchelle Arnold, of Oglethorpe. Also, his daughter Shelly (Denny) of Minnetonka; two sons, John Arnold of Talladega, and Jeff Arnold (Cheryl) of Talledega; and their mother, Doris; two step-daughters Fanchone (Leigh) of Oglethorpe, Georgia, and Becky (David) of Smyrna, Georgia; fourteen grandchildren and thirteen great-grandchildren; along with several nieces and nephews. Graveside services will be held at 11 AM, Saturday, June 27, 2020 at the Mt. Zion - St. Luke Lutheran Cemetery in Oglethorpe on Highway 26 West, just pass the intersection of Highway 240. Military honors will be rendered. Pastor Barb Koch will be officiating the service. The family is encouraging social distancing and understands that everyone may not be comfortable attending. In lieu of flowers, please make a contribution to a military charity of your choice. (Due to Covid-19 restrictions, social distancing practices will be in place and if you're attending the graveside service, face masks should be worn.) Watson-Mathews Funeral Home in Montezuma, Georgia is honored to serve the family of Mr. James Lawson Arnold.

OGLETHORPE, GA - James Lawson Arnold (Jim), of Oglethorpe, Georgia, died at Miona Geriatric and Dementia Center on June 25, 2020. Born on what he delighted in telling you was The Greatest Day of the Year, December 19, 1927, Jim lived to the... View Obituary & Service Information

The family of Mr. James Lawson Arnold created this Life Tributes page to make it easy to share your memories.

Send flowers to the Arnold family.