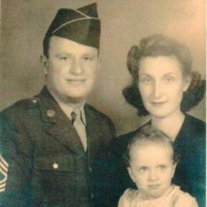 MARSHALLVILLE, GA - Retired Master Sergeant Hugh Dorsey Stripling, 95, of Marshallville, GA passed away Friday, May 10, 2013 at Houston Medical Center in Warner Robins. A visitation with refreshments will be held Monday, May 13, 2013 from 11:30 a.m. to 1:30 p.m. at Watson-Mathews Funeral Home. The funeral procession will depart from the funeral home immediately following the visitation. Funeral services are scheduled for 2 p.m., Monday, May 13, 2013 at Andersonville National Cemetery with military honors. Mr. Stripling was born July 29, 1917 in Merryville, Georgia to the late Richard Stripling and Ella Faircloth Stripling. He was retired from the U.S. Army as a Master Sergeant, having served his country in World War II, The Korean War, and The Vietnam War. He was a Mason and member of the Masonic Grand Lodge in Fort Valley, GA. He loved his country and serving in the military, of which he did proudly for over 30 years. He was a wonderful husband and father; a carpenter and handyman extraordinaire, and enjoyed woodworking and gardening. Mr. Stripling was preceded in death by his wife, Wautile Stripling; a son, Tony Lee Stripling; three brothers, J.C. Stripling, Louis Stripling, and James Stripling; and two sisters, Udell Stripling and Bernice Adkins. Mr. Stripling’s survivors include his daughters Marla Stripling of Marshallville, GA and Karen Stripling Geter of Louisville, KY; a brother, Dock (Kate) Stripling of Augusta, GA; two grandchildren, Christopher Geter of Louisville, KY and Shannon Self of Tynsboro, MA; and three great-grandchildren, Anita Geter, Timbrel Geter, and Mariha Geter, all of Louisville, KY. Seven Nephews, J.R. Skinner; Paul , Tom & Ray Stripling; Eugene, Richard & Ricky Stripling; Four Nieces, Diane Purvis, Pat Atkins, Joyce Cervantes & Eloise Stripling; and a host of other family members. The family expresses sincere thanks to The Oaks Nursing Home, Summerhill Nursing Home, and Houston Medical Center for the great care given to Mr. Stripling; to friends and family for their love and support during this difficult time. Friends may express condolences to the family and view the VIDEO TRIBUTE at www.watsonmathewsfuneralhome.com. Watson-Mathews Funeral Home of Montezuma is in charge of funeral arrangements.

MARSHALLVILLE, GA - Retired Master Sergeant Hugh Dorsey Stripling, 95, of Marshallville, GA passed away Friday, May 10, 2013 at Houston Medical Center in Warner Robins. A visitation with refreshments will be held Monday, May 13, 2013 from... View Obituary & Service Information

The family of Mr. Hugh D. Stripling created this Life Tributes page to make it easy to share your memories.

Send flowers to the Stripling family.