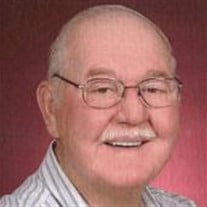 OGLETHORPE, GA - Frederick William Brandt Jr., 77, of Blakesburg, went to be with the Lord July 3, 2019 at his home in Oglethorpe, GA. He was born April 18, 1942 in Blakesburg to Frederick William and Mary Ann Thomas Brandt Sr. Fred was raised in Blakesburg, Albia and Ottumwa. He graduated from Ottumwa High School in 1960. He then enlisted in the Navy and was stationed in Jacksonville, FL. There, he met the one true love of his life, Betty Jane Cox, and they were married in Tampa, FL on August 30, 1967. They started their home together in Blakesburg, IA in December of 1967; and to this union they welcomed 3 children, Frederick “Freddy” William III, Shawn Douglas and Tracy Lynn Brandt. He worked for the Iowa Army Ammunition Plant in Burlington for 7 years, then for John Deere Ottumwa works, retiring in 2003. Fred was a family man and quite a story teller. He enjoyed being around people and loved making others laugh. Most of all, he loved his family and friends, and was delighted to be able to spend time with his kids, grandkids and great grandkids. He loved his visits to Georgia to see his extended family as well. He enjoyed playing his accordion at the annual HeeHaw show in Unionville, IA, at the church or anywhere people would listen. He truly enjoyed camping at the Iowa State Fair, and his "gift to gab" followed him everywhere he went and he never knew a stranger. He was a member of the Blakesburg Lions and also a long-standing member of the Blakesburg Volunteer Fire Department. Fred is survived by his beautiful wife of 51 years, Betty Jane, of rural Blakesburg, his son, Shawn (Lisa) Douglas Brandt of Ottumwa, granddaughters, Brooke Miller and Michaella Brandt, grandsons, Bradley (Cassie) Miller and Michael (Cara) Brandt, great granddaughters Helena Brandt and Avalyn Finley, and great grandsons, Austin Porter, Kazin Miller, and twins, Jaxon and Huxton Miller. He also leaves behind his brother, Scott (Tammy) Brandt, brother-in-law Paul (Evelyn) Cox and a daughter-in-law, Kelly Brandt. Also many nieces, nephews and cousins. He was preceded in death by his parents and grandparents, a son, Frederick “Freddy” Brandt, III and a daughter, Tracy Lynn Brandt, a brother, Richard Brandt and a sister, Thressia Murphy. Funeral services will be 1 p.m. Tuesday at Zion Community Church of God with Pastor Jesse Elkins officiating. Burial will be in Oakview Cemetery in Albia. Military services will be conducted by Walter B. Schafer Post #775 Veterans of Foreign Wars and O.B. Nelson Post #3 American Legion. Visitation begins at 11 a.m. Monday at Reece Funeral Home, 607 East Second Street, Ottumwa, IA 52502, with the family present from 6 p.m. to 8 p.m. Monday. Memorials may be made to his grandchildren’s education. Reece Funeral Home in Ottumwa, Iowa was entrusted with out of town funeral arrangements. (641) 682-4509 www.rfh-ia.com Watson-Mathews Funeral Home in Montezuma, Georgia was entrusted with local arrangements

OGLETHORPE, GA - Frederick William Brandt Jr., 77, of Blakesburg, went to be with the Lord July 3, 2019 at his home in Oglethorpe, GA. He was born April 18, 1942 in Blakesburg to Frederick William and Mary Ann Thomas Brandt Sr. Fred was raised... View Obituary & Service Information

The family of Mr. Frederick William Brandt Jr. created this Life Tributes page to make it easy to share your memories.

Send flowers to the Brandt family.