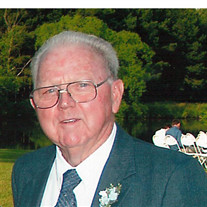 RUPERT, GA - Mr. Donald Massey, age 90, of Rupert, Georgia passed away peacefully Sunday, April 21, 2019 at his residence. Visitation will be held from 6 PM to 8 PM on Wednesday, April 24, 2019 at Watson-Mathews Funeral Home. Funeral services will be held at 11:00 AM on Thursday, April 25, 2019 at Ideal Baptist Church. Rev. Sydney Clay will officiate the service. Burial will follow at Oglethorpe Memorial Gardens. Mr. Donald Massey was born September 24, 1928 to the late John Robert Massey and Pauline Cochran Massey. He and his wife, Elizabeth were married on December 27, 1953 and raised three children in the same house in Rupert where he was born. He and his brother, Lamar, owned and operated the Ideal Service Station (fondly known as the “Glory Hole”) from 1957 until 1998. Together, they have operated a number of businesses over the years, some of which include an egg business, farming and heavy equipment operation. He served as president of Ideal Lions Club for many years. As a member of the Ideal Baptist Church, he served faithfully as chairman of the Deacon Board, choir member and in many other roles. Donald was also a retired volunteer fireman. Donald’s memory will forever be treasured by his three children: R. Allen Massey (Rosemarie) of Burleson, Texas, Donna M. Wood (Michael) of Lake Wylie, South Carolina and Lee Ann M. Avera (Don) of Naples, Florida.; one brother, Lamar H. Massey (Linda) of Rupert, Georgia; seven grandchildren: Allison M. Hood (Terry) of Hawkinsville, Georgia, Bradley O. Layfield (Janelle) of Shoreline, Washington., Addison G. Layfield (Caitlin) of Cumming, Georgia, Gerard A. Massey (Shannon) of Alexandria, Virginia., Jonathan W. Avera (Kodi) of Sherwood, Arkansas, Ryan M. Avera, New Braunfels, Texas, and Robert A. Massey II, Burleson, Texas. Also surviving are five great-grandchildren along with many nieces and nephews. Along with his parents, John Robert and Pauline Massey, he is preceded in death by his loving wife, Elizabeth L. Massey and a brother, John “Jack” W. Massey. Flowers will be accepted or memorial contributions may be sent to Ideal Baptist Church, P.O. Box 50, Ideal, Georgia 31041. Friends may express condolences to the family and sign the online guestbook at www.watsonmathewsfuneralhome.com Watson-Mathews Funeral Home in Montezuma, Georgia has the privilege of being entrusted with these arrangements.

The family of Mr. Donald Massey created this Life Tributes page to make it easy to share your memories.

Send flowers to the Massey family.