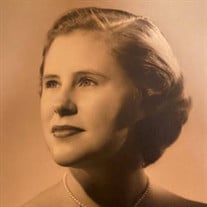 Tribute to Dr. Christine Lewis McKenzie Williamson (Christy) (February 27, 1935 - September 6, 2021) passed away peacefully, in Athens GA. after a 12-year battle with Alzheimer’s Disease. Always a charming, southern lady, her reaction to the diagnosis was simply “How rude. I really value my mind.” Indeed, she had a brilliant mind. She was a member of Mensa with a PhD in American Literature and a noted scholar of Faulkner and Welty. She was an educator for 42 years – first with Davidson County Schools in North Carolina. When the family moved to Sugar Mountain, NC, she became a college professor for over two decades at Lees McRae College and Appalachian State University. Also, she spent nights teaching adults to read in rural Watauga County. Christy and her late husband, Dr. Matt Winn Williamson, retired to her childhood home, Montezuma GA and she quickly came out of retirement to teach at Macon County High School. After Winn died, she moved to Athens, GA to live with her daughter, Elaine Powell Cook. Christy continued to teach at Athens Academy and Athens Technical College until her Alzheimer’s diagnosis. While teaching was her greatest passion, her career actually started at the Central Intelligence Agency while her then husband, Rev. Woodson Lea Powell IV, attended Virginia Episcopal Seminary in Alexandria VA. She wouldn’t say exactly what she did those years with the CIA, but she was always proud of her work and her country. Christy was the only child of a senator, peach farmer, entrepreneur, John T. McKenzie and his hometown sweetheart, Louise Lewis McKenzie (both deceased). Her father, John T., taught her to hunt, fish, golf, fly planes and love the outdoors. She even kept her camping gear and a Coleman stove in the trunk of her Cadillac – and a cane pole and a box of crickets on her back porch. Christy later learned to snow ski and fox hunt. She did many of these activities well into her 70’s. Her mother, Louise, encouraged her in the finer things every Mayflower Society lady should know– however, instead of attending ballet classes, Christy snuck out the dance studio back door to eat sugar cane and smoke “rabbit tobacco.” Ultimately, she found music, drama, literature, and languages which brought her joy throughout her life. She had a pitch-perfect voice, even towards the end when music still moved her and sparked memories. She played the piano, guitar and banjo which she taught in the home while her children were very young. She loved music of all kinds from blues to bluegrass, hymns to hip hop, opera to ABBA. As a young girl, Christy attended high school at St. Catherine’s in Richmond, VA; Hollins College in Roanoke, VA; and the University of North Carolina in Chapel Hill. She cherished her summers as a counselor at Camp Merrie-Woods in Cashiers, NC as an instructor in marksmanship, chorus, and camping survival. Her enthusiasm for everything was contagious. For “fun” she would declare a hero/heroine of the year and and read their biography along with their body of work…and somehow it really WAS fun! She even made English literature fun by pointing out all of the tawdry parts of Shakespeare and Chaucer. While her accomplishments and interests were many, her genuine love for her family and friends was her trademark. She believed that all people - no matter their color, creed or culture - had the potential for goodness. She taught her children that respect and kindness could help you meet any challenge and any challenging people. Whenever there was disagreement, she would say “Somewhere in the middle lies a truth that can move you forward.” Christy is survived by her devoted daughter, Elaine Powell Cook, son-in-law (Jon) and grandchildren (McKenzie and Jack) of Athens, GA and by her beloved sons, Brien Scott Powell of Pittsboro, NC and John McKenzie Powell of St. Louis, Mo., as well as John’s daughter (Nicole Schumacher) and three great grandchildren, (Garett, Allie, and Natilynn Schumacher) of Watford City, ND., plus Christy’s outstanding step-daughters, Sissy Brock (Walter) of Louisville, KY and their children (Robin and Dillon), and Shelley Williamson of Concord, NC. “We began losing her to Alzhiemer’s many years ago but now her spirit soars. She is dearly loved and deeply missed.” Lord & Stephens Funeral Home, West in Watkinsville and Watson-Mathews Funeral Home in Montezuma are providing funeral services. Due to COVID restrictions, a celebration of Christy’s life will be scheduled at a later date (hence this long tribute.) There will be a small graveside service on Wednesday, October 6th at 10:30 am at Felton Cemetery in Montezuma, GA. In lieu of flowers, the family asks to consider a donation in her memory to the C.A.R.T. program for Alzheimer’s Research Trust through the Rotary Club of Athens – Checks payable to: Rotary CART Fund: P.O. Box 5951, Athens GA 30604. Watson-Mathews Funeral Home in Montezuma, GA has been entrusted with graveside funeral services for Dr. Christine Lewis Williamson.

The family of Dr. Christine Lewis McKenzie Williamson (Courtesy) created this Life Tributes page to make it easy to share your memories.