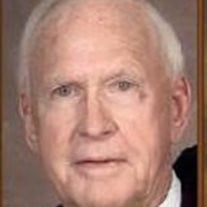 TIFTON, GA - Benton Jones DeVaughn, 78, of Tifton, died Tuesday, March 4, 2014, at his residence. Funeral services will be held at 11:00 am Friday, March 7 at the First Baptist Church Sanctuary in Tifton. GA with Dr. Wayne Roe officiating. The eulogy will be given by John Seals. Interment will follow in Felton Cemetery, Montezuma, GA at 3:00 pm. The family will receive friends from 6:00 until 8:00 Thursday evening at Albritton-Beaumont Funeral Directors. Active pallbearers are, Nelson Kunes, Patrick Kunes, Paul Akins, Clark Walker, Chuck Hill and Carter Choate. Mr. DeVaughn was a graduate of Montezuma High School and later played college basketball with Auburn University until an injury ended his career. He then graduated from the University of Georgia with a bachelor of business administration in accounting. Mr. DeVaughn was an insurance executive and owner of the DeVaughn Agency in Tifton. He was a Certified Insurance Counselor. He was born and raised in Montezuma where he served as a deacon for the First Baptist Church as well as a Sunday school teacher and superintendent of the Sunday school department. He was a prominent business man in Montezuma, serving as president of the Kiwanis Club, and serving the city on the bi-racial committee. Mr. DeVaughn served as a director for the Montezuma Banking Company. He served in the United States National Guard and was currently a member of the First Baptist Church in Tifton. He was preceded in death by his parents, Carl Linton DeVaughn, Jr., and Amzie Jones DeVaughn Seals; stepfather, John Emory Seals and two brothers, Carl Linton DeVaughn, III, who died in 1997 and Charles Seals, who died in 1978. Mr. DeVaughn is survived by his wife, Shirley Lee DeVaughn of Tifton; three daughters and one son-in-law, Amzie DeVaughn Harper of Americus, Catherine DeVaughn Hillis of Lincolnton and Elizabeth and Tim Costner of Savannah; one son, John Jay Altman, IV of Chicago; six grandchildren, Michael Harper, Amanda Harper, Sara Elizabeth Stiles, Callie Stiles, Thomas Costner and Catherine Costner; one brother and sister-in-law, John E. and Lea Seals of Oakland, CA and a sister-in-law, Joan Arnold DeVaughn of Augusta. Flowers are being accepted or donations may be made to the American Heart Association, 305 University Dr., Suite 1, Valdosta, GA 31602, First Baptist Church, 404 Love Ave., Tifton, GA 31794 or the Fulwood Garden Center, 802 12th St. W., Tifton, GA 31794. You may sign the guest registry at www.albritton-beaumontfuneralhome.com. Albritton-Beaumont Funeral Directors in Tifton, GA is in charge of arrangements.

The family of Mr. Benton Jones DeVaughn created this Life Tributes page to make it easy to share your memories.

Send flowers to the DeVaughn family.