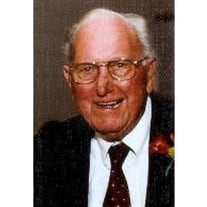 Oglethorpe – Allen Jackson Head, Jr., 84, died Wednesday, October 21, 2009. Visitation will be held from 2 to 4 p.m. on Sunday, October 25 at Watson Mathews Funeral Home in Montezuma, Georgia. Funeral services will be held at 10 a.m. on Monday, October 26 at the Oglethorpe Baptist Church, Oglethorpe, Georgia. Burial to follow at the Andersonville National Cemetery in Andersonville, Georgia. Brother Myke Harbuck, Brother Don Meade, and Brother Clarence Keene will officiate. With his mischievous grin and contagious sense of humor, Allen will always be remembered as a “character” and a gentleman. Anyone who knew Allen will remember his genuine affection for people and his love for family. They will also recount his tireless efforts to ensure that the commitment and sacrifice of his fellow Veterans always be remembered and his firm belief that “Freedom Is Not Free.” He was a lively man who never met a stranger, and spent many happy hours in downtown Oglethorpe with friends who would stop by to visit at The Warehouse. He touched many people’s hearts throughout Georgia, but particularly here in his middle Georgia home. Mr. Head was born May 17, 1925, in Andersonville, Georgia to Allen Jackson Head, Sr. and Irene Murphy Head. He graduated in 1942 from Oglethorpe High School. “Allen, Jr.” was drafted into the United States Army in August 1943, and soon after, married his high school sweetheart, Thera Kelley, in December 1943. During World War II, Allen served in Europe and participated in the D-Day Invasion, receiving the Purple Heart with two oak leaf clusters. Allen built a rewarding 35-year career as an agent and manager at the Life Insurance Company of Georgia. During his retirement years, he was an active member and deacon at Oglethorpe Baptist Church. He served as a member of the Macon County School Board for 19 years, the Oglethorpe Lions Club for 23 years, and Post Commander at the Oglethorpe VFW Post #6442 for 22 years. Allen is survived by his loving wife of 65 years, Thera, and his five children: Jack Head (Carol), Mike Head (Sandra), Steve Head (Vicky), Cheryl Blizzard (Danny) and Jan Saunds (Danny). He was brother to Harmon Head, Murphy Head, Helen Jean Grace and Sarah Trask. He will always be “Papa” to his eleven grandchildren and “Little Papa” to his nine great-grandchildren. He was loved by them all. In lieu of flowers, the family asks that donations be made to Oglethorpe Baptist Church, P.O. Box 267,Oglethorpe, GA, 31068, or charity of your choice. Watson-Mathews Funeral Home of Montezuma has charge of arrangements.

The family of Allen J. Head, Jr. created this Life Tributes page to make it easy to share your memories.